Friday Harbor High School Athletic Director Rod Turnbull sent in an update on the Wolverine playoffs. The boys soccer team is going to the state tournament. The girls soccer team and the volleyball team are both one win away from securing a berth at state. 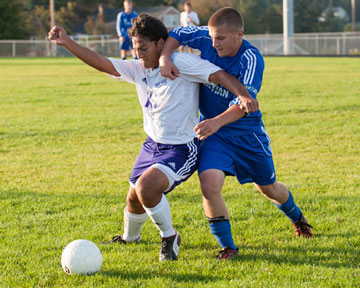 Friday Harbor's Arno Issanjou boots the winning goal in the Wolverines' 3-2 victory over Grace Academy Friday, Oct. 24. In addition to converting the penalty kick late in the match, Issanjou also scored the Wolverines' first goal. The Eagle scored twice before senior Sam Stewart kicked the equalizer in his final home contest. Friday Harbor moved into a tie for first place in the Northwest 2B-1B League with the win over the Eagles. Photo by Matt Pranger

Boys Soccer – They traveled south to Franklin Pierce HS where they met up with Evergreen Lutheran, the District 2 #2 seed. The Wolverines played a great team game and won 2-0 securing a berth into the boys 1B/2B state tournament.

The boys will now continue playing for seeding position for the state tournament. They will first play Mount Vernon Christian on Wednesday, November 5, at Mount Vernon HS. The game will start at 12 noon. 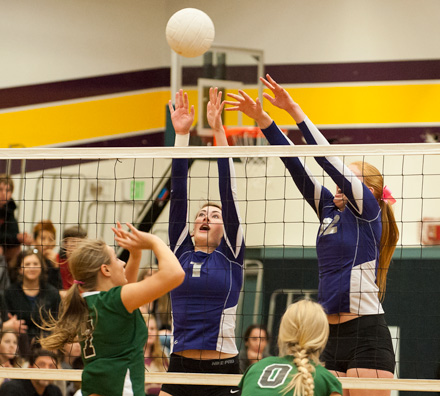 The girls lost their second match of the Day in a winner to state game vs Napavine, but get a second opportunity to earn a state berth on Wednesday, November 5, when they travel to host Napavine HS to take on Life Christian.

Should they win, they would continue playing for seeding at the state tournament held in Yakima on November 14 & 15.

The Bi-District bracket is posted at www.nw1a2bathletics.com . 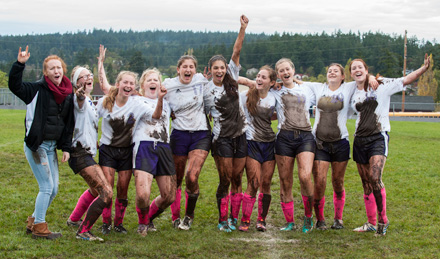 Girls Soccer – The girls soccer team are the 2014 NW 2B/1B League Champions and will enter the Bi-District tournament as the NW#1 seed.

They will host a first round loser out playoff game on Wednesday, November 5, against the District 2 #2 seed. This game will be played at Mount Vernon High School and is scheduled for a 2 pm start.

With a win, the girls would secure an entry into the State tournament, and would play again on Saturday, November 8 to determine seeding into the state tournament. For more information including tournament brackets, visit www.nw1a2bathletics.com

Football – Our Football team played hard, but came up short Friday night losing to La Conner17-0. This puts La Conner in the lead for the 2nd and last berth to the state playoffs. La Conner will secure the berth with a win at Orcas on Thursday. Should they lose, Friday Harbor and La Conner would play a tie-break game on Tuesday November 11. Friday Harbor plays one more non-league game on Thursday at 5:00 vs Bellingham.

Win or lose the team will play again on November 8 in district play, and then on November 13-15 in the first round of the state playoffs.