The rare combination of being an “either way” race with sun and wind made the 46th Annual Shaw Island Classic one to remember. Hosted by the San Juan Island Yacht Club, the race starts and finishes in Friday Harbor and circumnavigates scenic Shaw Island in either a clockwise or counterclockwise direction. It presents a navigational challenge as currents, wind and projected boat speed must be considered to determine which way to ‘round the island.

Boats head off in two directions at the start of the 2016 Shaw Classic. Marc Forlenza photos 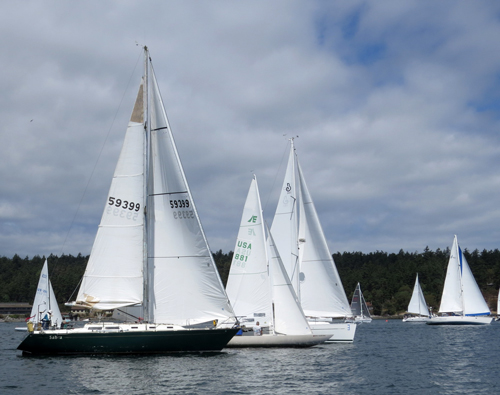 A falling ebb tide and robust 12 to 14 kt. S/SE winds at the start of the race split the fleet with about half sailing off in each direction. Brightly colored spinnakers filled with that SE wind for those boats making a run up San Juan Channel, while the counterclockwise boats beat to heading for Upright Channel.

“This was my seventh Shaw Island Classic and I think, with the S/SE breeze it was the most enjoyable yet,” said Nigel Oswald, skipper of the F-25C trimaran, Makiki. “Although there were some compelling reasons to choose either direction around Shaw this year, clockwise paid off for us, the deciding factor being a known favorable ebb through Wasp Passage.”

Wasp Passage, between Shaw and Orcas Islands, proved once again to be a notorious challenge with light wind and shifty current around Bell Island. Clockwise boats, arriving at Wasp Passage first, enjoyed the benefit of that favorable ebb as the other half of the fleet, now a bloom of spinnakers, crossed the mid-course line in Harney Channel. 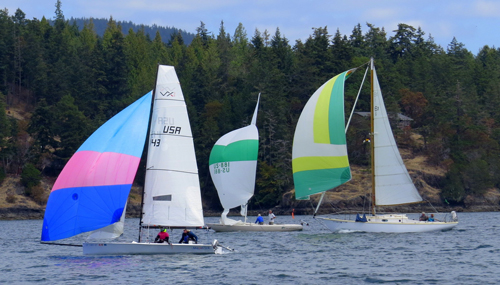 The race finished on a flood as sailors fought the current in both San Juan and Upright Channels. The wind softened again at Crane Island adding to the challenge of making it through the pinch point between Crane and Flat Point.

“The whole fleet was moving pretty good,” Oswald added. “After a good race with overall winner, Crazy I, we sailed the final leg with a nice fetch at 14 kts. of wind to finish on a high note.”

Oswald in Makiki finished in 2.49 hours; the fastest elapsed time. Crazy I, a Martin 242 skippered by Chris White finished in first place on corrected time. 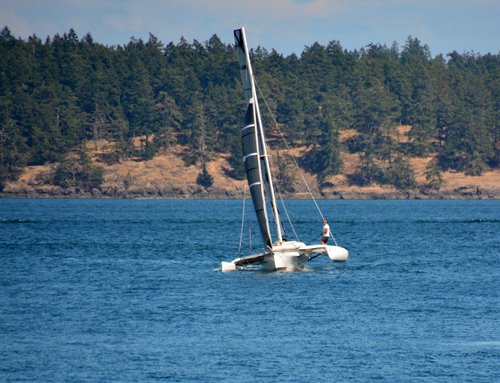 Makiki bears down on the finish line. Bill Waxman photo 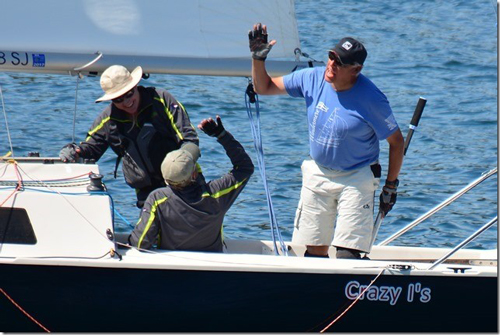 Racers and guests enjoyed a hearty lasagna dinner prepared by the SJIYC First Mates. Wally Lum, who skippered Marquita in the very first Shaw and has competed in every one of the 46 races since, was awarded an honorary T-shirt.

First Mates President, Carol Smith reminisced about that first Shaw race, organized in 1970 by her late husband, Ed Kennell. “That race started the tradition of light winds; drifting was the order of the day,” said Smith. Only one boat managed to coast across the finish line before the deadline, beating it by a mere three minutes. That boat was Peniel, skippered by Capt. Ed Kennell. “It was great fun,” Smith added. “We had a pot luck on Brown Island and they threw Ed and his crew into the pond!”

2016 race results are below. Other than fastest elapsed time, all awards are based on corrected time, adjusted for time-on-time based on PHRF or committee assigned ratings. Detailed results can be found at the Club’s website at www.sjiyc.com.