Twenty-seven boats are registered to compete in the 2019 Martin 242 North Americans Championship (NAs) this weekend, June 28 to 30 in West Sound, Orcas Island. The Orcas Island Yacht Club in partnership with its title sponsor, Ullman Sails. is hosting the event. The list of participants is posted at the end of this article. 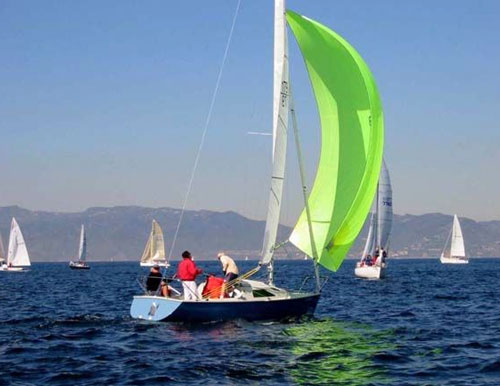 Fleet 2 selected Orcas Island in recognition of the extraordinary growth of the local fleet (which went from zero 242s in 2014 to eight at the end of 2018) and the opportunity to experience a new and exciting venue. This will be the first time ever that NAs have been held in Washington.

This location was selected by host Fleet 2 after a survey of more than 50 owners in the Pacific Northwest. The event will be a one-class, one-design event held on the Canada Day long weekend.

OIYC plans to make spectator boats available for its members and the community to come watch the competition. Boats will depart regularly between 11 and 4 on the weekend from the club’s pier at the head of West Sound on Deer Harbor Road.

Competitors will arrive on Friday and have the opportunity to participate in a practice race that afternoon to learn local conditions with a dinner hosted by Sail Orcas youth sailors to follow. Competition will begin on Saturday and Sunday and will include four to six races per day, weather permitting. Social activities will include a competitor’s party on Saturday night and an awards ceremony on Sunday after racing.

1630 No warning signal after

1500 No warning signal after

ABOUT THE MARTIN 242 The Martin 242 is the most active keelboat racing class in the Pacific Northwest. Designed 30 years ago by well-known Vancouver yacht designer Don Martin, this 24’ speedster continues to attract top talent to its ranks. Strict class rules result in identical boats and racing that is truly a test of crew skills and strategy.

There are currently eight boats in the growing OIYC fleet and local Martin 242 crews have won the prestigious Whidbey Island Race Week overall trophy (2016) and the club’s coveted “Sailor of the Year” trophy for the past two years. Last year, local Orcas sailors placed 3rd, 4th, and 7th in the North American championship held in Cowichan Bay, British Columbia.

All In Michael George 307 CYC/SMWYC