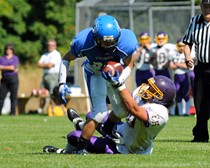 Orcas Island rallied in the final minutes for a 20-15 victory over cross-water rival Friday Harbor on Dennis Dahl Field Saturday, Sept. 10, 2011. A 23-yard pass from Robbie Padbury to Devon Stanzione set up the winning 2-yard touchdown plunge by Jake Zier with 18 seconds remaining in the game.

"We didn't bring that cup home," said Friday Harbor coach Darrin Scheffer. "We wanted to, but we got a taste of it and I think these kids want to bring it home next year."

The Orcas' football team wanted to represent its community positively and sharpen its skills in their second game of the season. "We did both things well," Harris said.

"It was a great effort on our kids part," said Friday Harbor coach Darrin Scheffer. "We're a young team that made some mistakes but we kept fighting."

Friday Harbor went up 15-13 with two minutes and 23 seconds to go in the fourth quarter when replacement quarterback Toby Frazier tossed the ball to C.J. Woods for a 32-yard touchdown. Stanzione blocked the point-after kick.

After the kickoff, Padbury hit Stanzione for a 25-yard reception. The Vikings gained more ground when the Wolverines were called for illegal contact but went backwards on an extra-long, long snap. That miscue was negated when Friday Harbor was whistled for pass interference. Padbury zipped the ball to Stanzione for their biggest connection of the day and Zier, a lineman converted to fullback, pounded the ball in for the win. Padbury booted the point-after

Orcas scored first on Padbury's 12-yard strike to Stanzione with 5:45 to go in the first quarter. Padbury converted the PAT.

The Vikings'Aubrey Schermerhorn recovered the ensuing onside kick. Herbie Sisson pulled in a 35-yard pass and the Vikings were on the verge of a two-score lead. Woods picked off a pass in the end zone and the Friday Harbor sophomore returned the ball 46 yards.

Woods grabbed a 22-yard touchdown pass from junior Donald Galt with 5:40 to go in the second period. Reuben Delay kicked the point-after and the Wolverines tied the game 7-7.

An errant snap by Orcas led to a safety and Friday Harbor went up 9-7 at 6:17 in the third quarter. The Vikings went up 13-9 on Padbury and Stanzione's 75-yard pass play with 3:33 left in the third. The conversion failed.

Friday Harbor was driving at the beginning of the fourth quarter when Orcas junior Daniel Briggs intercepted a pass.

The tandem of Padbury and Stanzione accounted for more than half of the Vikings' potent passing game and connected for two touchdowns. Padbury, a senior, threw for 361 yards, completing 12 of 26 attempts. Stanzione, a junior, tallied 192 yards receiving on eight receptions.

The Vikings had 465 yards overall offense to Friday Harbor's 240 but the Wolverines made some key stops and took advantage of a few turnovers.

Senior linebacker Tyler Jensen led the Viking defense with 14 tackles. "He was really a force inside," Harris said.

Scheffer commended his offensive line. "Our offensive line did a super job... They moved much bigger kids. I'm pretty proud of them."

Frazier replaced Galt after the junior was injured late in the first half. "Toby did a great job for us," Scheffer said

More in this category: « Vikings hold onto the cup 20-15 Sports roundup »