Brian Dennis, Shannon Ford and Bob Jungquist chanted “No Fin, No Fin, No Fin,” while David Reep neared the end of a 25-minute battle with a large chinook Friday, Feb. 6, the first day of the 12th Annual Roche Harbor Salmon Classic. Dennis netted the fish, hauled it aboard the Tater Yott and checked to make sure the fish didn’t sport a wild king’s adipose fin. He jumped, fist-pumped and yelled: “No Fin!” 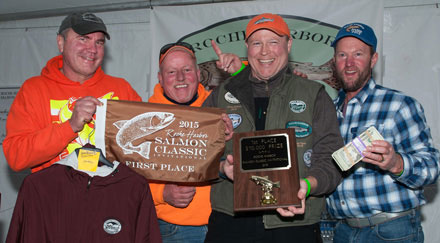 The 22-pound, three-ounce keeper -- wild kings must be released -- resulted in a huge victory Saturday night for the longtime fishing buddies from Mount Vernon: They netted the first-place trophy and $10,000.

The four friends since kindergarten have fished in all the previous Roche Harbor Classics, finishing second and third. “It’s our third time in the money,” Reep said. “It’s only appropriate to fill out the straight.”

Reep plans to split the prize money with his fishing partners but will keep a new award for himself: A Carhartt vest adorned with patches and winners’ names from the dozen Roche Harbor derbies. Tater Yott’s crew was working a hole in Thatcher Pass about 2 p.m. when Reep hooked the eventual winning fish that fought mightily until the end. “My pole was bent over the whole time,” Reep said. 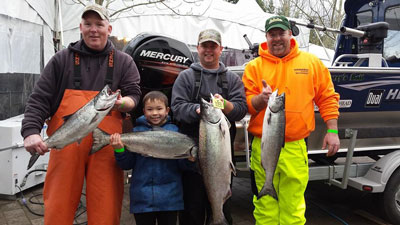 Ninety-nine boats with 338 anglers fished in this year’s derby. Eighty-four fish were weighed in the first day and 63 the second for a total of 147.

“It was awesomer,” derby director Debbie Sandwith said of this year’s derby.

Anglers fished in wet and blustery weather the first day but the wind abated the second day. Most were just glad to be on the water as the state Department of Fish and Wildlife originally planned to close the San Juan Islands to fishing. Sandwith thanked “the angel” who resurrected the 12th Roche Harbor Classic.

Roche Harbor Resort and Island Boat Rentals, in cooperation with Salmon for Soldiers, sponsored two boats that offered four combat veterans an opportunity to fish. “We’re going to do it every year,” Sandwith said. 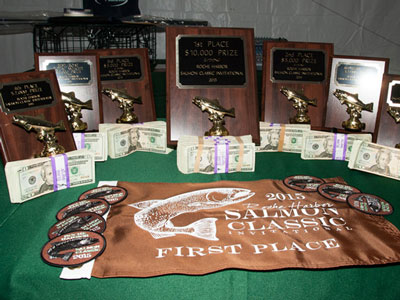 The 2015 Roche Harbor Classic winners are: