Salmon fishing is fair to slow in the San Juan Islands. It’s worth getting out there and giving it a try though. You never know when you could land on some nice fish. 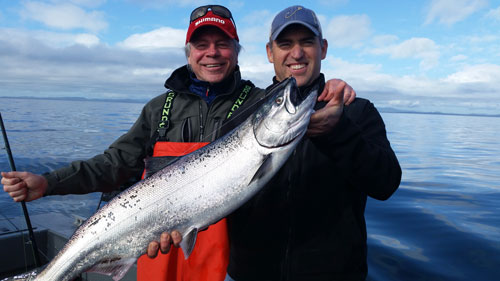 Bob Rondeau, the Voice of the Huskies, had a good day fishing with Derek Floyd of Angler’s Choice Charters. This beautiful Blackmouth fell to a Silver Horde cookies and cream spoon. Look at that weather and water. What an awesome time to be out February fishing in the ‘Juans.

Silver Horde Kingfisher lite spoons, and Lurecharge Hootchies, behind an 11” flasher have been working for us. 48” of leader on the spoons and 36” on the hootchies should get you dialed in. Any color as long as it’s greenish or purpleish.

Entering week 4 of the Frank Wilson Memorial Blackmouth Derby, the standings are as follows:

That’s pretty close between 2nd and 3rd, although maybe not as close as that Daytona 500 finish, sheesh! And, this tournament isn’t over by a long shot. It’s scheduled to last through April 10, 2016.

Thanks to King’s Marine in Friday Harbor for sponsoring the 10-week-long tournament. All proceeds go to San Juan Island Emergency Medical Services. 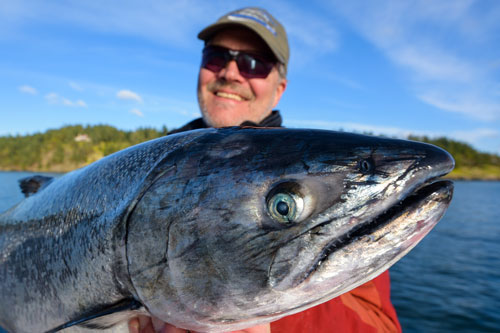 Greg Gorder caught this pretty 15.46lb Chinook to take the week 3 prize and move into 2nd place in the Frank Wilson Memorial Blackmouth Derby. He also won the local derby hosted by the Bluewater Bar and Grill in Friday Harbor held on Saturday February 22, 2016. 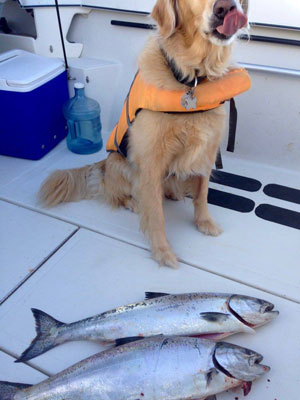 Rory O’Connor and pooch limited on tasty Blackmouth this weekend. I lick my chops just like that when I think about BBQ’d Winter Chinook. I like the PFD on the dog. A life jacket is also man’s best friend on the water. 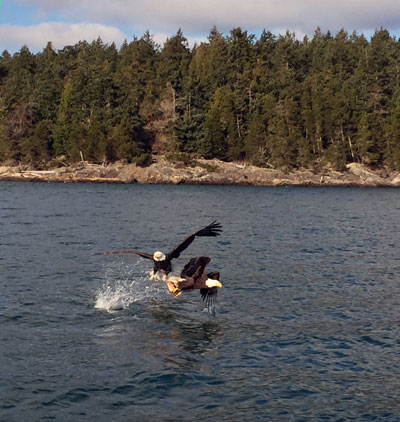 Two Bald Eagles duke it out over a fish near Friday Harbor. You never know when you might have a cool sighting like this anywhere in the islands.