Fishing update from Kevin Klein: Salmon fishing has picked up some in the San Juans. The size of fish has improved too. We haven’t had a problem getting keeper fish. Silver Horde Kingfisher Lite spoons in 3” have been the hot ticket for us. 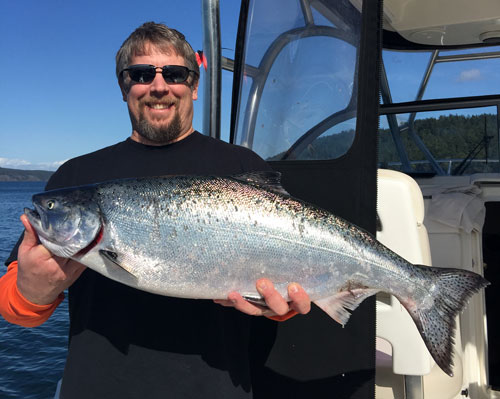 WDFW Marine Area 7 Rule Change: Beginning March 12, 2016, the retention limit will drop from two hatchery clipped Chinook to one. This action is taken to keep the Winter Chinook season open, hopefully to its original April 30 ending date. As of right now, it’s estimated that the marine area is at 80% of it’s allotted Chinook encounters. 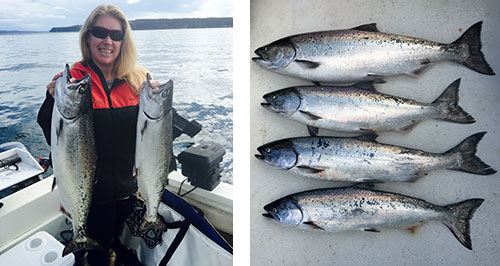 (Left)  Karen Rhinehart holds up the last of a two fish limit for the season. Those are some nice chunky Blackmouth right there. (Right:) Here’s a boat load of Blackmouth. These hatchery fish are made to be caught…and eaten! These resident Chinook are some of the best eating salmon that swim. 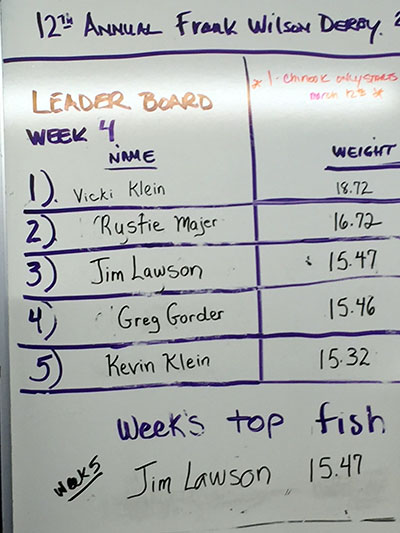 Here’s the leader board through week five of the 12th annual Wilson Derby. Jim Lawson bumped Greg Gorder by a hundreth of an ounce to take over third, and a money spot…for now. Half way through the tournament, the ladies still hold the top two spots with Vicki Klein in first and Rustie Mager in second. Usually some bigger fish show up in March, so it’s still anybody’s game.