We’re off to State. Friday Harbor High School Golf team member Keegan Hebert played his way into 8th place to earn a spot at the State Tournament. Twenty competitors from two Districts, representing six schools played off for the top nine positions. Keegan played a solid round with a score of 101 on the demanding Gallery Golf Club on Whidbey Island. 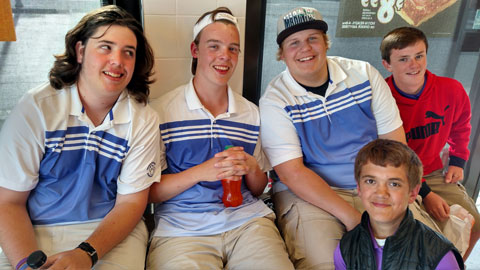 Teammates Jess Kowolitz missed first alternate by one shot and finished 11th out of 20. Right on his heels was Cole Thomas who finished 12th on shot behind his teammate. Teammates Jordan Davis and freshman Dylan Posenjak went along to help cheer on their fellow team members.

The State tournament will be played at Columbia Point Golf Club in Richland, WA on May 27 – 28. We will be headed to the Tri-Cities on Tuesday to get a practice round under our belts. This is why we practice hard for the last two months; making it to the finals makes it all worth the effort.