Friday Harbor High School Golf Coach Jack Rice sent in this update: Wolverine senior Jesse Kolowitz, dug deep and was able to hold on to his game to secure the 9th spot to the State Golf Tournament.

What a difference one or two shots make in a game. Each player could find a situation where shots could have been saved. Anyone who has ever played golf can understand how difficult it is to maintain such a high level of concentration for a full 18 holes of golf. 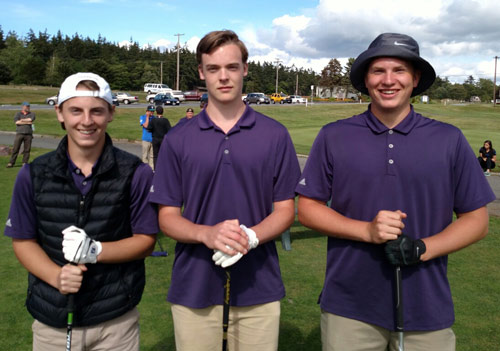 The course conditions were tough; only six players out of the field of 20 broke 100. It rained that morning and the rough was wet making play more difficult. The playing conditions and the added pressure of a trip to the State Tournament probably added to the higher scores.

With 50 spectators following, the three Friday Harbor players teed it up and went head to head to see who was going to be the alternate.

On the first hole, Jess hit the green in regulation and two putted for an easy par.

Joe’s approach shot was over the green; he chipped up 6 feet away and made the putt for par.

Cole’s approach was short of the trap with the pin tucked in tight. He flopped a 60-degree wedge over the trap and the ball hit the pin and ended inches away for an easy par.

As the crowd moved to the second tee, Joe realized he left his clubs back on the tee box! The marshal loaned me his cart to drive Joe back to retrieve his bag. Is this confidence, did Joe really think he was going to end this on the first hole or was he so excited that the bag just got lost in the moment? We retrieved his bag and as we were driving back to the second tee, I told him to take a few deep breaths and show this crowd how to drive a golf ball.

He got a warning from the official for slow play and then stepped up and hit a driver over 300 yards right down the middle. He proceeded to hit his sand wedge 8 feet and made the putt for a birdie.

Cole and Jess congratulated Joe on his win and said it was ok to lose to a birdie on one of the toughest holes on the course!

This has been a great golf season. The team has gone undefeated in every match, winning the District and League Championships. Five seniors - Jess, Cole, Jesse, Keegan and Jordan - will graduate this year. It has brought great joy to me to watch them develop as golfers and fine young men.

We will leave for Spokane on Sunday for the State Tournament. If one of the top 9 players come up sick, Joe will be there as the alternate to take his spot. Jesse will be in fine company as he will have four of his senior teammates to pick from to carry his bag during the practice round.

I am already looking forward to next year. With Joe, Dylan, Tanner and Levi returning, golf at FHHS has a bright future.