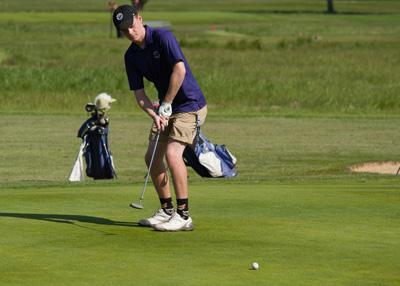 Tobin Arden from Lopez scored a 40 on the San Juan Course to lead all players as medalist.  Dylan Posenjak, Friday Harbor and Reese Hamilton, Lopez tied for 2nd with a pair of 44’s.  Freshman Ethan Havel had another personal best with a score of 48 and finished 4th. With the Lopez men finishing 1, 2 they won the bragging rights for the day with an 8 shot victory over the local squad.

The last time we played Lopez, 4 of their top Ladies all broke 50 and beat almost everyone on the wolverine team.  For this team match I selected 6 players to go up against the Lopez squad. We pulled out a slim victory 248 to 258.  A star golfer from Lopez, Nora Zapalac, got caught in one of San Juan’s famous 6 foot deep sand traps and found out how hard it is to escape.  If it hadn’t been for that misfortune, the win would have been determined by the last putt.

Dylan Posenjak: shots 44 with two triples on 6 and 7.  I watched him play the 7th hole and he drove the ball 40 yards from the green in one shot.  He then shanked his second shot OB for a 2 shot penalty. If Dylan had pared those two holes he would have shot a 38.

I could continue through the entire team and the pattern continues.

So what does this tell us?  Life and golf have a lot in common.  When we make little mistakes, which we all do, it’s pretty easy to recover from them.  When you make big mistakes it has a tendency to ruin your day and wreck your golf score.  My challenge is to figure out how to stop making Big mistakes before we head off into our District Tournaments!

Match was played at the San Juan Golf Club

Friday Harbor Golf Team:   The six players in bold * were the varsity for this match.