Wolverine Coach Jack Rice sent in this report on an extraordinary District Tournament at the Gallery Golf Club, Oak Harbor May 12, 2022.

I’m reminded of the movie ‘Caddy Shack’, where Bill Murry is caddying for the Mon Senior and the wind is blowing so hard the flag stick is bent over, almost touching the green. Murry says “No problem your Eminence, it’s going to be a slight gale today”. 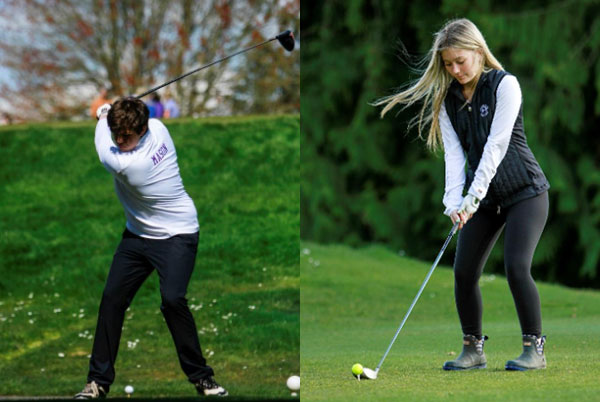 The weather at the District Tournament at the Gallery Golf Club on Whidbey Island US Naval Air Base was about the worst cold and wind I have ever seen players compete in. The temperature was in the low 50s and the winds were gusting between 20 to 40 mph. To top it off, it started raining as the players made the turn to play the back 9 holes.

State Tournament contender, from Orcas, Burly Hildreth set the pace for the day with a fine 81. If we were to set par for the day, according to the conditions, it was probably 80. Burly won the tournament by 9 shots.

The low 21 players for the day advanced to the next level, which is the Bi District Tournament hosted at Loomis Trails, May 19. The Friday Harbor boys team hung in there and three players advance.

First year player, Dylan Mughal, almost punched his ticket to the next lever except for a set of broken glasses. He made the turned in 18th place and was holding his own on the back nine hole. Have you ever tried to play golf in the rain with glasses on? On the 17th hole the rain was coming down so hard he couldn’t keep his glasses dry. He took his prescription glasses off to dry them and snapped the frame, almost losing his lens. I’ve noticed he wore thick lens glasses but I had no idea that without his glasses he is almost blind. Once his glasses broke, he was done. He couldn’t see the ball, or if he could, he couldn’t tell which one to hit.

When I caught up with him on the 18th hole, he was standing in front of the green while the other three players were putting out. I’m thinking “cool”, he must have chipped in and didn’t have to putt. Unfortunately, he had to withdraw from the event due to an equipment failure, a set of eye glasses. We all learned something that day. As the Coach, I’ll now carry a roll of duct tape in my day pack to cover any emergency.

Now for the story of the day, Friday Harbor’s own Izzy Graham won the coveted last spot to the Ladies State Tournament. Emma Worgun from LA Conner won the Ladies division with a great score of 80.

Izzy hung in there and won that final position by one shot. As a senior this is quite an accomplishment for any high school golfer. Only 20 ladies in schools of our size will advance to the big show. It’s an honor to become part of that elite group. A big congratulations to Izzy.

Two of our other Lady golfers were close by finishing in a tie for 13th spot. Senior Yumi Thomas and Junior Ayana Berube missed first alternate by 1 shot. Under those tough weather conditions, I was proud the way everyone hung in there and did their best.