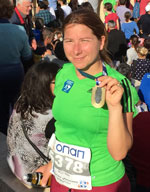 Irina Bell ran past jubilant crowds shouting 'Bravo, past flags from numerous nations, through tunnels vibrating with the sounds of drumming. One of 13,000 she ran in the hot sun from Athens to Marathon.

The 2014 Athens marathon, on November 9, 2014,  covered the  route  Pheidippides ran in 490 B.C. The Greek soldier ran 24 miles from a battlefield to Athens to bring word of victory.  2,504 years later, Irina followed his  historic footsteps.

The marathon length of 26 miles 385 feet was established at the 1908 Olympics. The added length had to do with making the finish line end up near the Royal Box.

Irina, who works at Market Place, and her husband Scott, who just retired from King's Marine, planned a trip to visit her family in Romania and vacation in Greece.   Curious about the date of the Athens marathon, she went online and found out it was the same time the couple would be in Greece.

At that point she had been done with marathons for this year. She had run three  - Vancouver, Chelan and San Juan Island - in 2014.

With the perfect timing of the Athens marathon, "I couldn't not do it," she said. Athens was her 15th marathon and the biggest in terms of participants. The Vancouver race has 5,000 participants. San Juan Island  about 200.

"To honor Pheidippides, I ran the marathon gadget-free," she said. "I wanted to to experience the essence of running. To just run, every runner knows what that means. I wanted to focus on the journey and on how to best complete it."

Irina said she was tired but happy after the race. "It took me a long time to realize the greatness of the experience. It came little by little." It was on the 10-hour flight home that it sunk in. 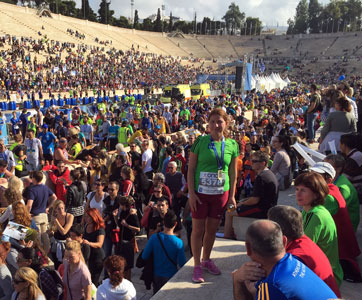 Scott said, "The enormity of it is overwhelming. Counting the runners in the 5K and 10K, there are 30,000 participants.

While it is an individual sport, Irina says running has a team feel to it. Runners understand each other. "It's like we speak a different language," she said.

Both Scott and Irina marveled at how well organized and well run the event was. Irina was also impressed by the friendliness of the elite runners. They maneuvered easily around the other runners warming up on the track.

For the marathon, runners are divided into groups of people with the similar running times. The elite runners start first of course.  Irina was in the fourth block.  She completed the marathon in 4 hours and 4 minutes. Her personal best is 3:50. Her goal is to qualify for the Boston Marathon. The qualifying time was 3:45 but has been changed to 3:35 for next year.

In the women's division Irina finished 237 out of 1,954 runners. She said running is considered too manly in many countries which explains why the men outnumbered the women 6 to 1.

Irina would like to do the Athens marathon again sometime when she can train specifically for it and arrange the family visit around it. She didn't get a lot of training in during her visit this year. "They don't understand running in Romania." she said.

Scott said, "When she first told her mom about running. She said 'Why?'"

Irina laughed and said, "She asked me if someone was paying me.  I didn't tell her I was actually paying to do it."

She said that now her mother sees  that it is important to her and respects what she is doing.

Irina was a little worried about the terrain of the Athens race. The description warned of a 12-mile long hill. "Maybe it was hilly for a flat-lander, someone from Chicago," she said. The San Juan Island marathon was much more difficult in terms of hills.

The day before the race was drizzly and cool. It was 84 degrees and sunny on race day. Water stations were located every 2.5 kilometers.

Her perception of the race was altered because it was measured in kilometers.  "It seemed like it went by in a snap," she said.

While Irina didn't use her I-pod, she did  hear a lot of music. Among the thousands who lined the streets were musicians. She especially appreciated the drummers  in the tunnels.  "I usually die a little in the tunnels," she said.

The runners wearing olive wreaths, the giant banners, and the music all added to the festive atmosphere.

The race ended in Athens Stadium.

On her flight home she wrote: "The take home message is I went and I ran. I used all of my marathon experience learned from painful past mistakes as well as from breakthroughs. Once again I tested the limits of my body because I knew how to and I think I ran a good run."