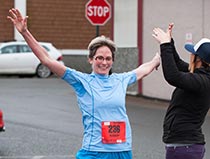 Pam Stewart of San Juan Island drew on extra motivation to power through the Run Ladies Run 11-kilometer race Saturday, March 21, 2015: “I was mostly running hard for my youngest son Joe, who just had ACL surgery last week from his hard basketball and soccer playing.”

Mom made son proud, winning in 52 minutes and 37 seconds. “The last time I ran it I came in second, so I’m pretty happy today,” Stewart said.

Deborah Jones of Orcas Island placed second in the 11K in :54:05 and Emmy Pollock of Poulsbo took third-place in :57:57.

Whitney Laverty of Bloomingtion, Ind. made the most of her “destination run,” finishing first in the RLR’s half-marathon in one hour, 33 minutes, 30 seconds. “It was good,” Laverty said of her sixth 13-mile race. “I knew it was going to be hilly but it wasn’t too bad and it was scenic and beautiful.”

Lyndsy Taylor of San Juan was the first islander to finish the half-marathon, completing the course in 1:44:56. Irina Bell, also of San Juan, placed third in 1:47:16.

A bit of wind and rain didn’t dampen the spirits of 120-plus runners and walkers. “It was really fun,” Stewart. “I love to support Run Ladies Run. I believe in their efforts and they put a lot of energy into it.” 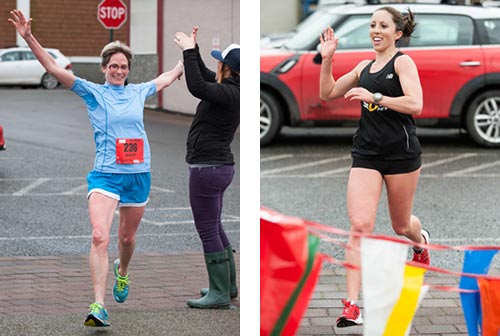 Story and photos by Matt Pranger