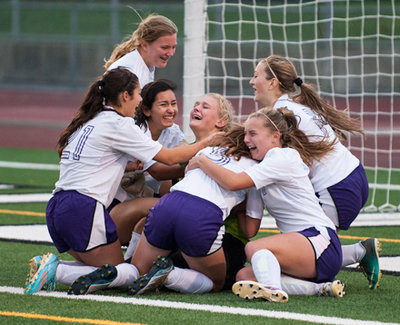 Friday Harbor goalkeeper Hayden Mayer, center, is mobbed by her teammates after she made a match-winning stop in the Wolverines' 1-0 victory over Mount Rainier Lutheran Wednesday, Nov. 5. Matt Pranger photo

Friday Harbor next meets Crosspoint in the Class 1B/2B Bi-District Championship Saturday, Nov. 8 at Interlake High School. The winner advances to the state tournament as the Bi-District’s No. 1 team and the loser is the No. 2 seed.

At the start of the season Hopkins knew this year’s squad was capable of reaching the Class 1B/2B state tournament, something no Wolverine accomplished since 2005. “To have it actually come true is pretty cool,” he said.

Wolverine goalkeeper Hayden Mayer stopped three of the Hawks’ shootout kicks. “If we had such a thing, Hayden would be the Player of the Game,” Hopkins said.

The sophomore keeper is thrilled the team’s leaders will finish their careers among the state’s elite eight. “I’m just so happy we can take our seniors -- who carried our team this year -- to state,” she said.

Friday Harbor controlled the ball most of the match but a goal eluded them. “We didn’t capitalize on opportunities,” Hopkins said. “We couldn’t put it in the back of the net.”

“Our defense has been really good,” Hopkins said. “They work really well together.” Senior defender Sophie Marinkovich stymied the Hawks‘ attacks in spite of a sore ankle and “Kaitlyn had another great game,” he said.

In the shootout Domenech and sophomore Hannah Hopkins drilled their shots into the net while Mount Rainier Lutheran converted one attempt but the Hawks were stoned by Mayer on two other tries.

The Wolverines led 2-1 after they missing two shots and a Hawk’s kick went high. Mayer secured the win by knocking down the the Hawks’ fifth shot. After the officials awarded the victory to Friday Harbor, the Wolverines sprinted from midfield to the goal to hug their keeper.

Friday Harbor’s boys soccer players, who had competed earlier and stayed to cheer on the Wolverine girls, joined the celebration.

“That’s what you coach for, to see that mob of the boys and girls teams at the end of the game,” Hopkins said. “That was awesome.”

Mayer was overcome after the stressful shootout. “I was way too happy ... laughing and sobbing at the same time,” she said. “It’s the most emotional I’ve ever been in a game in my life. It was like a huge weight was lifted off my shoulders.”