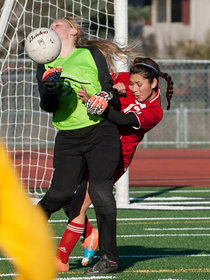 The final score does not reflect it but the Friday Harbor girls soccer team dominated Brewster in a 2-0 win at the Class 1B/2B State Quarterfinal in Mount Vernon Saturday, Nov. 15. The Wolverines move on to a semifinal versus Liberty Bell at 4 p.m. Friday, Nov. 21 at Sunset Chev Stadium in Sumner.

Win or lose Friday, the Wolverines play again Saturday in Sumner. The winner plays the other semifinal victor -- Crosspoint Academy or Adna -- in the championship; the loser meets the Adna-Crosspoint loser in the consolation match.

“I love that we’re going to have 21 games,” Hopkins said.

Kaitlyn Domenech placed a perfect penalty goal, giving the Wolverines their winning margin 15 minutes into the match. The ball arced from 35 yards out and slipped under the crossbar in the upper right corner, out of reach of the Bears’ goalkeeper.

“That was nice,” Hopkins said. “It was Kaitlyn’s fifth penalty-kick goal of the season.”

Hannah Hopkins scored the Wolverines’ second goal 12 minutes into the second half off an assist from Courtney Bell.

The Wolverine offense made several other attempts but came up short. “We came so close so many times,” Hopkins said. “They find a way to win -- and make me age in the process.”

Brewster rarely threatened as the Friday Harbor defense rarely allowed the Bears to move the ball past the half line. “We controlled the field,” Hopkins said.

That was consistent with previous matches: When the Wolverines went ahead this season, they relinquished the lead only once.

“If we do score, we don’t usually lose,” Hopkins said. The Wolverines outscored opponents 46-19 en route to a 14-5 record that includes 10 shutouts.

Hopkins thanked the Wolverine boosters for their support. “The fans were so amazing. A lot of people made the trip,” Hopkins said. 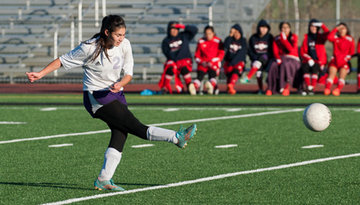 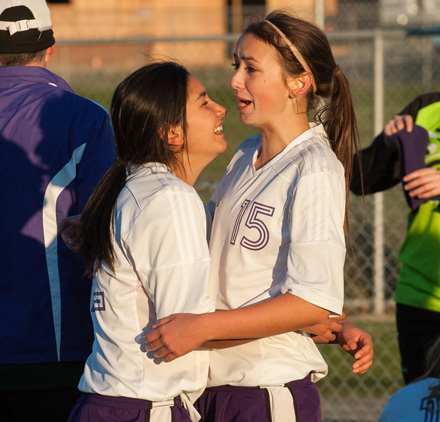