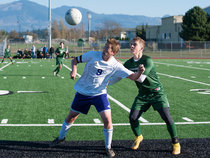 The Wolverines advance to a semifinal match against Waitsburg-Prescott at 8 p.m. Friday, Nov. 21 at Sunset Chev Stadium in Sumner.

If the Wolverines win Friday, they play for the title against the other semifinal winner -- Grace Academy or Mount Vernon Christian -- on Saturday at Sunset Chev. If they lose they play in the consolation contest against the Grace-Mount Vernon loser. Win or lose they will play on the final day of the season.

“A team’s goal at the start of the year is to play every game you can and that so rarely happens,” said Friday Harbor coach Andy Duke. “It’s so nice to know when your last game is going to be.”

“We had a beautiful build-up down the right side and then Arno went 1-on-1,” Duke said. ”

Issanjou added the insurance goals in the second half on assists from Sam Stewart and Max Haenel. “Arno’s one of those players who’s clutch,” Duke said of the sophomore. “He likes the pressure, he’s not afraid.” ”

Defense dominated the match as neither Wolverines nor the Crusaders managed many quality goal attacks. “It was a physical game,” Duke said.” 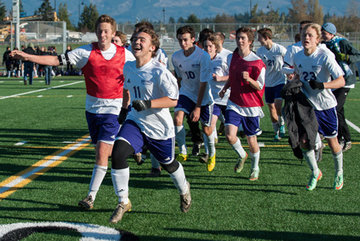 Sam Paul-Barrette (11) leads the Friday Harbor boys soccer team off the field to their fans after their 3-0 victory over Northwest Christian Saturday, Nov. 15. Matt Pranger photo

Though Dalton Ayers saw little action at the net, Duke commended his goalkeeper for his “composure and his leadership.” The senior on-field director played “an extraordinary game,” Duke added. “Dalton settled people down.””

Friday Harbor’s coach is pleased with all his players for their ability to remain steady when not playing their best. “We can be slightly off and compete right through it and that’s a huge change,” Duke said.”

The Wolverines are “eager to get back to work” after their biggest victory so far this year. “The players came up to my table (on the ferry home) and asked, ‘What do we have to work on?’ That’s pretty impressive.””