Rallying from a 10-point deficit, the Friday Harbor girls basketball team trimmed La Conner 35-30 Thursday, Feb. 18, 2016 at the Class 2B District 1 Tournament and forced a season-ending showdown with the Braves. The teams are scheduled to meet for a fifth time this season at 4 p.m. Saturday, Feb. 20 at Sedro-Woolley High School. The winner advances to the state tourney; the loser is eliminated. 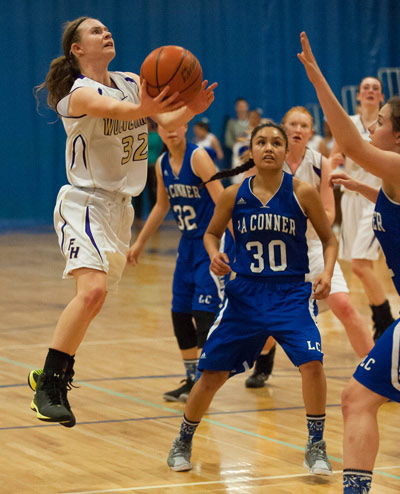 “I’m excited that we were able to beat La Conner and didn’t end our season,” said senior Madi Kincaid, who scored 11 points for the Wolverines, including four clutch points in the final minutes. “I knew we could do it and we did.”

“I’m really happy with how we played – coming back from being down,” said senior Taylor Turnbull who chipped in five crucial points down the stretch. “We just out-played them.”

Turnbull sank a three-pointer to cut the Braves’ lead to 29-28 with five minutes to go. Friday Harbor continued its stingy defense, limiting the Braves to one point in the final period. Kincaid drew the Wolverines even with the Braves at 30-30 with 2:22 left. Friday Harbor gained the lead for good when Turnbull sank two free throws with 2:02 to go.

After La Conner missed a three-point attempt, the Braves fouled Kincaid with 38 seconds remaining. The senior canned both to give the Wolverines’ a two-possession lead. Sophomore Cierra Bailey capped the comeback by sinking a free-throw with 10 seconds left on the clock.

La Conner appeared headed to a state-tourney clinching win at the start of the game, building a 10-point second-quarter lead. With Friday Harbor’s offense struggling, Bailey started driving to the hoop and scored eight of her 11 points in the period.

When the Braves started to put more outside pressure on Bailey, the Wolverines fed junior Hayden Mayer for a couple inside baskets.

“It was definitely a team effort but Hayden and Cierra really had solid games.”

On defense, the Wolverines shut down the Braves’ top shooters.

“They were completely frustrated that they couldn’t get a shot off,” Woods said.

Friday Harbor also won the battle at the free-throw line, sinking 8 of 14 attempts while La Conner went 5-for-16.

The winner of Saturday’s district final will definitely have earned the right to advance to the Class 2B sweet 16. The home team was victorious in Northwest 2B/1B League play: The Braves won 46-25 on Jan. 15 and the Wolverines prevailed 33-30 on Feb. 5. In the district tourney, La Conner won 47-34 on Feb. 12 but Friday Harbor rebounded with their 35-30 season-saving win.

“I think we’ve thrown everything we have at each other, so it will just be who executes,” Woods said.