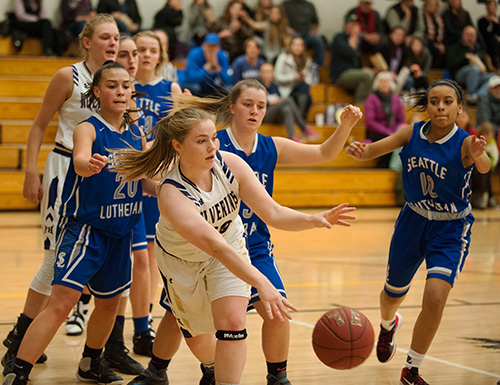 “We’re in the double-elimination tournament,” said Wolverine coach Fred Woods. “That’s what we wanted to do tonight.”

The Friday Harbor defense held Seattle Lutheran scoreless in the first quarter and limited the Saints (8-10) to only three points in the second period. “Our defense has been our go-to all year long,” Woods said.

However, Friday Harbor also struggled to score, putting up only seven points in the first half. “The more we missed shots, the more tentative we got on offense.” Woods said.

Ciera Bailey sparked Friday Harbor in the second half, scoring 12 of her 15 game-leading points. “Ciera came back and responded well,” Woods said.

Hayden Mayer scored 7 points for the Wolverines and Hannah Hopkins chipped in 6. Savannah Hopkins contributed 4 and Alexa Mora had 1.

The Bi-District bracket is posted at http://www.nw1a2bathletics.com/