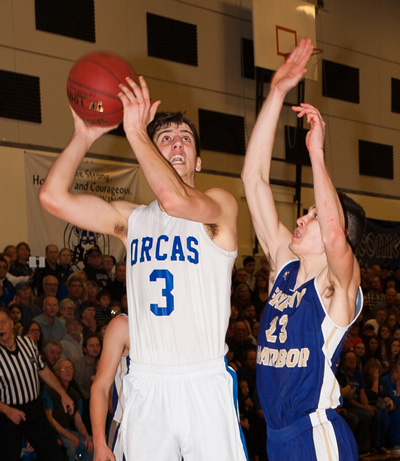 The Vikings (15-2) play Seattle Lutheran (19-3) for the title at 6 p.m. Thursday, Feb. 16 at Sedro-Woolley High School, the site of all remaining district games. The Saints advanced to the title game by topping La Conner 42-38 in the district's other semifinal.

Orcas' and Friday Harbor’s defenses dominated in the first half but both teams struggled offensively before a capacity crowd in the Vikings’ gymnasium. Orcas led 16-11 at halftime and went up 32-20 midway in the third quarter. The Wolverines closed the period with an 11-3 run and trailed 35-31. Friday Harbor close the gap to 42-38 with less than five minutes to go but Orcas sealed the win by sinking six free throws down the stretch.

The Vikings made nearly as many free throws as the Wolverines attempted: Orcas went 16-for-29 from the line and Friday Harbor was 10-for-19.

Friday Harbor senior John Gustafson scored 14 of his game-leading 16 points in the second half. Fellow senior Jake Lowe scored all of his 10 points in the fourth quarter. The other Wolverine scorers were: Senior Joe Stewart 7, senior Eli Cooper-West 3, junior Isaac Maye 3 and senior Andy Stromberg 2.