The Friday Harbor High School boys varsity basketball (14 wins and 8 losses) team knows that there’s a bigger prize 169 miles east in Spokane next week. Tonight at 7PM in Wenatchee they will focus on the task at hand: Take the stinger away from the Hornets of Oroville High School (14-9) in the 2B Regional Finals.

The winner will advance to the 2B State Boys Tournament in Spokane next Wednesday. The Wolverines look to punch their ticket to the dance for the second time in 3 years. To do so the Wolverines will need to take away the stinger from the Hornets.

The Hornets are losers of their last two games while the Wolverines will put their 9 game winning streak on the line. 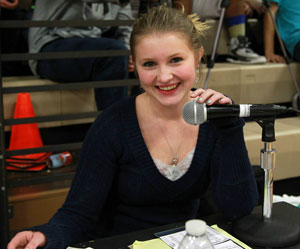 “Winning streaks don’t matter at this point,” says Friday Harbor Tiny Radio color analyst Kaila Olin. “However, what is important is that the Wolverines are peaking at the right time of the season.”

Indeed they are. The Wolverines have blown away their opponents during the 9-game winning streak (the third-longest streak in 2B). Their average margin of victory has been 17 points...save for a 5-point overtime victory against the Orcas Vikings. The 55-50 overtime road victory it didn’t have to be that difficult Kaila says.

“They had Orcas on the ropes several times but never put them away.” That lesson, Kaila says, is increasingly important because at this point it one and done the rest of the way. “The margin for error gets smaller and smaller from here on out.”

After surviving the flu bug and the normal nicks and bruises of a 22 game season the Wolverines also are healthier than they have been all season. With 8 days between contests the Wolverine boys will be well-rested….as well-rested as a team can be that has to take an hour ferry ride then traverse the snowy Cascade Mountains on the four-hour drive to Wenatchee.

Friday Harbor Tiny Radio play-by-play announcer, Oly Archibald, the Wolverines received a favorable draw with Oroville. “Friday Harbor, in their portion of the bracket are a #13 and Oroville is #12,” he said.

“Spencer can hit some 3’s but he’s also a load underneath the basket,” DaVoe said.

“Julian Lopez, plays much bigger than his 5’-7” would suggest,” said DaVoe. “He might be the wild card on the team. He rebounds quite well, gets a lot of steals, and loves to chase down loose balls.”

In 2013 Olin nearly led Port Townsend to a state playoff berth. “Basketball is not all about height but it’s about desire, she said. “ At 5’-2”, I wasn’t the biggest kid around but my senior year we had a lot of heart and got to one win from going to State.”

Oroville’s Third-year Head Coach, Jay Thacker, has produced a fundamentally sound team that is unlikely to beat themselves.

“When a center can step out and shoot 3’s and one of the smallest guys on the court is rebounding teams it can cause other teams some headaches,” says DaVoe. “Teams can’t afford to lose track of Martin or Lopez.”

Kaila agrees. “The Hornets can sting teams in a variety of ways,” she said. “Friday Harbor is going to have to play their most complete game of the year on both ends of the court.”

Tonight’s game can be heard on live on fhTinyRadio.com at 8 p.m. with the pregame show will start at 7:30 p.m.