Friday Harbor High School Wolverines beat the Coupeville Wolves 17-0 Friday, September 14, 2018. The football game was scoreless until about 1 minute before the half when Wolverine #84 Milo Geiser kicked a field goal. 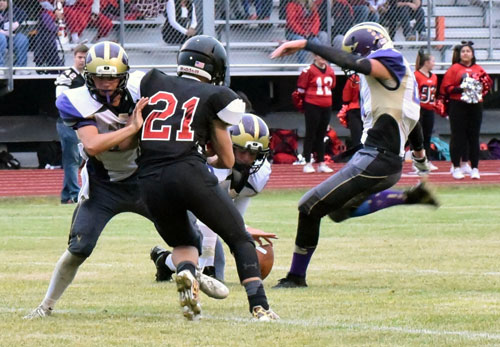 For most of the first half, both teams were scoreless as they traded the ball back and forth in center field. 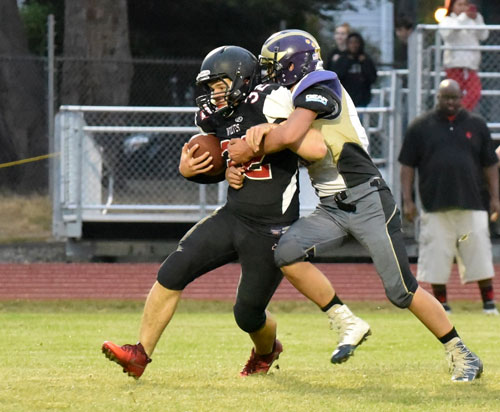 Friday Harbor defense was relentless in stopping the Coupeville Wolves. Here #55 Austin Wynn tackles the running back in the backfield for a loss of yards.  John Stimpson photo 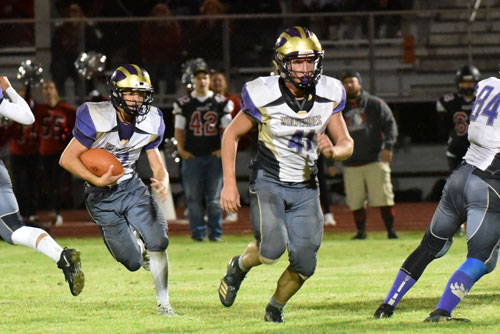 Rain forced the teams to focus on their running games.

At the start of the second half, Wolverine #41 Emeron ran up the middle from the 17 yard line and scored a touchdown. The point after attempt was unsuccessful resulting in a score of 9-0.

Late in the fourth quarter #41 Emeron Geiser burst through to score his second touchdown against the Wolves. John Stimpson photo

Late in the third quarter with 3:57 left to play the game was halted because of a lightning strike in the distance. After about a 25-minute delay, play was resumed.

In the fourth quarter Friday Harbor scored its second touchdown with #41 Emeron Geiser bolting through the line. An attempt for a two-point conversion was unsuccessful.

The Wolves gave the Wolverines a safety bringing the FH score to 17. 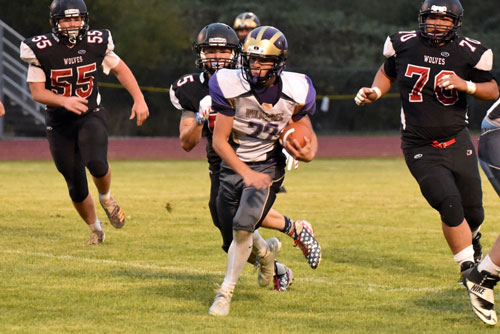 Wolverine #22 Kyson Jackson spirints up the middle for a big gain in yards. John Stimpson photo