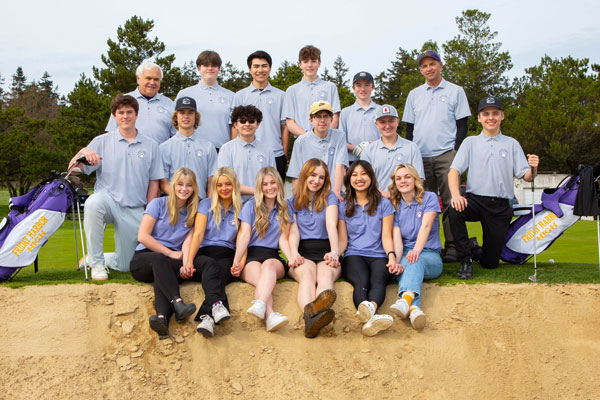 After being gone on Spring Break for a week I thought we might come back a little rusty but to my surprise we made a great showing. Jack Mason came out strong and was one under par through 6 holes. Cedarcrest is a short but tight course next to the Grace Academy. When I caught up with him on the 7-hole, Coach Waite told me he was playing beautifully; he had hardly missed a shot. I watched him 3 putt on holes 7, 8 & 9, the last three greens to end up with a score of 38. I could see immediately what he was doing wrong so for you golfers, here is the tip of the week. He had lifted his hands too high and dropped his eyes about 2 inches inside the putter line. If you don’t have your eyes over the ball when putting, it is hard to get the putter lined up properly. After five minutes on the putting green, and making a few corrections, he was back to normal, draining everything! The two 8th graders are locking their spots on the team with solid play, Jack Hess 47 and Finn Graham 55.

The ladies came out ready to play. We had three personal bests; Morgan Douglass 48, Izzy Graham 55 and Yumi Thomas 59. They have discovered that the 3 wood is a lot easier to hit off the tee than the big-headed long driver. Plunk, plunk, plunk, chip on, take a few putts and it’s amazing how well you can play. The remainder of the lady players did not post a 9-hole score.

We have our last away match Thursday 4/21 against Mount Vernon Christian.

We have two big events coming up, the Opening Day Scramble April 24th and the Friday Harbor Invitational May 6th. We have put together a 4-member team for the scramble and they have only one goal in mind: they want to win!

We have been playing golf for a month while most members are just dusting off their clubs for the first time this year. It’s going to be fun to see how they fare under the pressure.