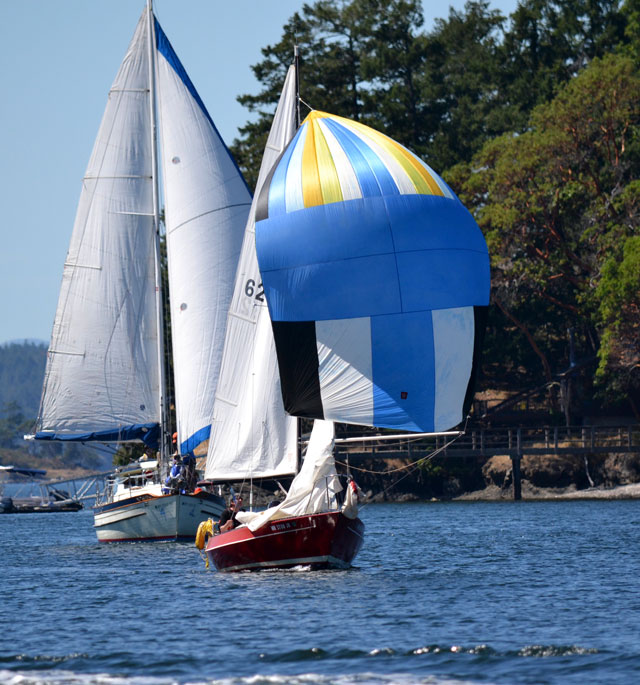 The unofficial 49½ and 49¾ Un-Shaw races in 2020 and 2021 provided an opportunity to escape the craziness, enjoy fresh air sailing, and keep racing skills sharp. 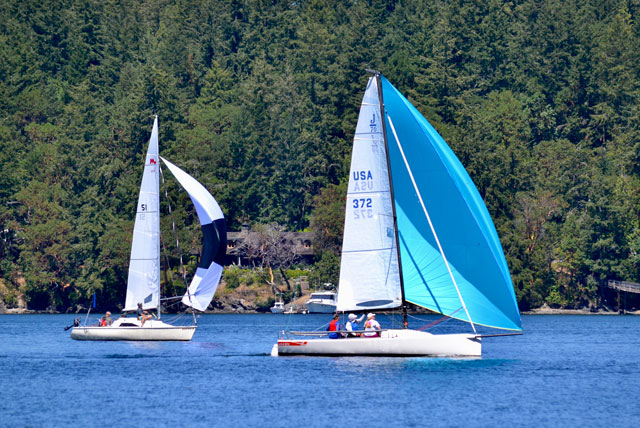 This race is unique in that Shaw Island is the only mark and can be rounded in either direction. It is only a 13-mile course, but shifting winds, variable currents, narrow rocky channels, and ferry traffic often turn it into a nautical chess game. 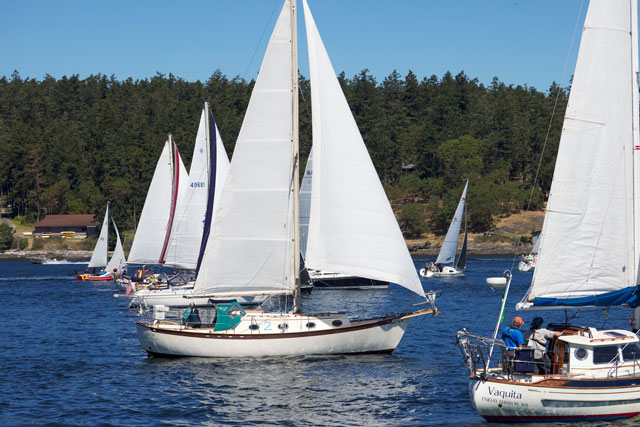 Start of the race. Photo by Jim Corenman

The fleet of 31 boats was split on the best way to round Shaw with 17 heading clockwise up San Juan Channel into the wind on a light flood. The other 14 hoisted chutes, put up spinnakers or stretched out on a broad reach in hopes of clearing Turn Rock and picking up the flood in Upright Channel. 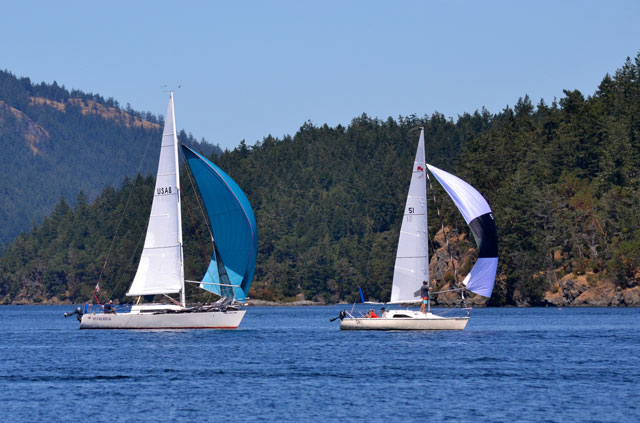 “One of the things that makes this race special is meeting the counter course fleet halfway,” said Mike Kaminskas, skipper of Homeless Hare who placed first overall on corrected time and first in the PHRF-B division. “I always love finding out how we are doing: if we are not yet at the halfway point, I say here comes the easy part, but if we are beyond the halfway point it’s, here comes the hard part!”

Nigel Oswald, skipper of Makika and first place finisher in the multihull division added, “Clockwise was definitely the way to go! I think we may have had one of the most pleasant Wasp Passage passages in memory, just a hole at the entrance and exit but a lovely kite run through!"

The mid-course committee boat reported that all the clockwise boats passed the halfway point before any of the counterclockwise fleet, which was stalled in Upright Channel. “The hardest part was Upright Channel,” said Betsy Wareham, skipper of Purple Martin and first place finisher in the PHRF-C division. “No wind, puffs from any direction, we just tried to connect the puffs and managed to get through…” 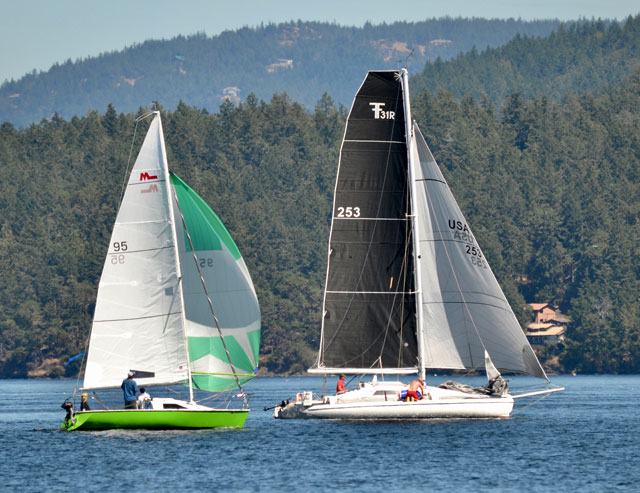 Despite hitting “the hard part” in Upright Channel, the clockwise fleet made it to the finish line, while most of the rest of the fleet languished in Wasp Passage as the clock ran out. Eighteen sailboats finished the race. None of the boats in the Cruising-A (no flying sails) division finished, so mid-course times determined the winners.

Spirits were high as racers once again gathered at the lovely SJIYC clubhouse overlooking the harbor for post-race banter and a hearty lasagna dinner served by the First Mates. An article about the first Shaw Island Classic race in 1970 was distributed with the title, “Backward Sailors Finish First”, showing that the founders set the expectation of fun from the start.

A new award was added in honor of Wally Lum, who skippered Marquita in the first Shaw and has competed in every race since. Donated by Michael and Kat Durland and the crew of Challenge in honor of their long-time skipper and friend, the Perseverance Award goes to the last boat to cross the finish before the deadline. This year’s winner was Treachery skippered by Chris White, the only counterclockwise boat to finish the race.

A shout out goes to multigenerational team Hydra skippered by Sam Richardson for placing first in PHRF-A division and first overall on elapsed time. Complete results and photos are posted at the Club’s website at http://sjiyc.com/shaw