Friday Harbor’s bid for a Class 2B State Tournament berth fell two points shy Tuesday, Nov. 6 in a 7-6 mini-playoff loss to Concrete at La Conner. The Wolverine players, coaches and fans believed the team scored those crucial two points but to their shock an official ruled a two-conversion unsuccessful. 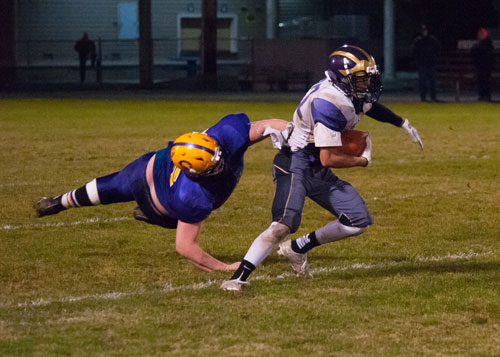 Friday Harbor (6-3) received the opening kickoff but Concrete (4-6) held the Wolverines and after a short punt the Lions took over at midfield. Concrete pushed down the field on the ground and senior Tyler Nevin scored with five minutes, six seconds to go in the 10-minute period. Senior Kendall Bass booted the point-after.

“At the beginning of the game, both offensively and defensively, we didn’t execute well and it ended up costing us,” Hauck said.

The Wolverines gained momentum on their next possession. They started on their 35-yard-line after the kickoff went out of bounds. Ten- and 20-yard scrambles by sophomore Kyson Jackson keyed Friday Harbor’s grinding offensive assault to the 10-yard line. Junior quarterback Jaden Jones rolled out right, opted not to pass and dove into the end zone at the pylon with 39 seconds in the first period.

Friday Harbor chose a two-point attempt to gain a one-point lead. The Wolverine fans and players cheered as it appeared, Jackson, in the middle of a scrum, pushed across the goal line before being driven back. The Wolverines’ celebration turned to confoundment after the back judge ruled Jackson’s progress stopped before the goal line.

“We settled down after that and started to take control but it was a little too late,” Hauck said. “I really felt we were starting to take over the game.”

Friday Harbor advanced to Concrete’s 13-yard line but a third-down sack knocked them into a fourth-and-long and they turned the ball over on an incomplete pass with about three minutes to go.

Concrete converted a couple of third downs on the ground and kept the ball away from the Wolverines.

“That format is hard,” Hauck said of the 20-minute contest. “We’re a second-half team.”

The loss stings but Hauck was proud of his players’ improvement. “We really started to come on at the end. We scored 40 or more points in the last three games,” he said.

The Wolverine defense allowed only 99 points during the regular season. “Defensively we were pretty good all season long,” Hauck said.

“We made big strides offensively… we were able to do things a little differently, which made it much tougher to defend us.”

“Yes, it was a great season, but right now it doesn’t feel so good,” he concluded.

Only Volk saw action in the playoff. “We had a lot of injuries with our seniors, unfortunately,” Hauck said.

“Emeron is just one of the most outstanding young men I’ve ever coached on and off the field,” Hauck said of the punishing linebacker and running back. “Defensively, he was our rock. He averaged about 12 tackles per game and was always in the right position… It really hurt us to lose him for the last three games.

“Ian stayed healthy and he really, really blocked well these last two or three games,” Hauck said of the lineman. “He really stepped up.

“Kaden learned so much, and improved so much throughout the year and really bought in and worked his butt off,” Hauck said of the running back and defensive back. “I’m really proud of him.”

Rude was unable to contribute fully due to being hampered by injuries for nearly half the season. “Andy missed the last two games and missed two other games in the season,” Hauck said.

With only three seniors, the Wolverines’ “young guys stepped up. I was really proud of them,” Hauck said. “The kids really came together. They put a lot of work in in the weight room in the off-season.

“It’s a special group and I think it showed in the way we played. They played for each other. They played hard, fast and physical and I think they brought a lot of excitement back to Wolverine Football. Wolverine Football … I think it really means something again. I noticed the town, the community is excited about it again and the kids have done that. It’s really gratifying.”

Hauck pointed out the Wolverines played Class A or 2A teams for non-league games and were competitive in all of them. “We were in every single game,” he said.

With more experience and possibly more athletes turning out next season, Hauck is optimistic. “As much as this one hurts, we’ll build on it and continue to grow the program. I look forward to next year.”