San Juan Island Library is offering a free series of Great Discussions in 2020 with Roger Morris as moderator. On October 26 the topic will be China’s Road into Latin America  at 7 p.m. in the library on Guard Street in Friday Harbor. 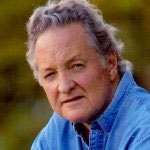